recent read; Writ In Blood (Serenity Falls, Book I) by James A. Moore 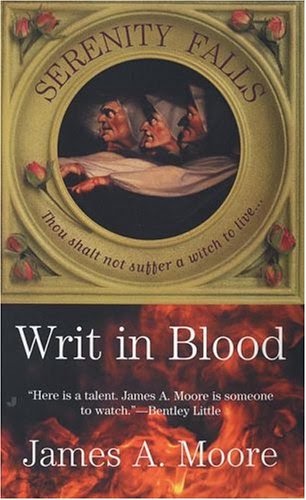 In upstate New York, a writer embarks on writing his hometown's history. What Simon MacGruder learns are dark and disturbing moments that the entire town seems to casually overlook. Occult forces are at work - they always have been, since Serenity Falls' cursed beginning. Meanwhile, Jonathan Crowley, a mysterious man with decidedly unnatural abilities, heads toward Serenity Falls to meet something dark and evil. But, strange events keep his arrival perpetually delayed.

Serenity Falls was originally one self-contained novel. When it went to paperback, the story was expanded into a trilogy of novels. As such, Writ In Blood tends to be a very large setup novel that sets the stage for the rest of the trilogy (I assume.)

As I've only starting reading Moore's work, so it might be early to say, but between reading Seven Forges and Writ In Blood, I would daresay James A. Moore likes to build his worlds and reveal them to us in due time. He does this deftly and keeps the reader interested all the way. Writ In Blood might be more about the town of Serenity Falls as a historical whole than about its inhabitants, though many of them obviously have roles to play. This opening tale is largely about atmosphere and that's what good horror is, to me.

Moore presents the tale across three aspects - MacGruder's experiences as he digs into the town history, the town history itself, and Crowley's journey. It's a good idea, with Crowley's physical action giving counterweight to the drama of MacGruder and the history of the town.

This opening tale ends on a some very unresolved notes. (see - "split up into trilogy.") But I've been invested enough in the twisted little town of Serenity Falls that I certainly will be returning for the second installment.
Posted by Paul R. McNamee at 4:30 PM